Photo by Łukasz Nieścioruk on Unsplash

Note: This article showcases technical details for implementing a Live Query engine with graphql-tools. If you are new to Live Queries you might want to check out Subscriptions and Live Queries - Real Time with GraphQL first.

Instead of subscribing to events live queries primarily subscribe to data changes.

You can learn more about the differences here

All those benefits, however, come with the drawback of the server having to become stateful, in particular, being aware of all the data the client operation consumes and re-executing those query operations for a specific client once the underlying data changes.

As I first started experimenting with GraphQL live queries the easiest solution was to simply trigger live query re-executions based on the Query object type root fields. E.g. a query with a selection set selection on the Query.viewer field could be re-executed by emitting the Query.viewer event through the live query store event emitter. However, the viewer could be a completely different record/resource for each client that consumes the given query operation.

To be more clear here is the corresponding schema:

Let's see how the implementation for this could look like:

If a specific user updates his login we shouldn't invalidate and re-execute any live query operation that has a viewer selection set for any connected user who might not even be affected by that change! 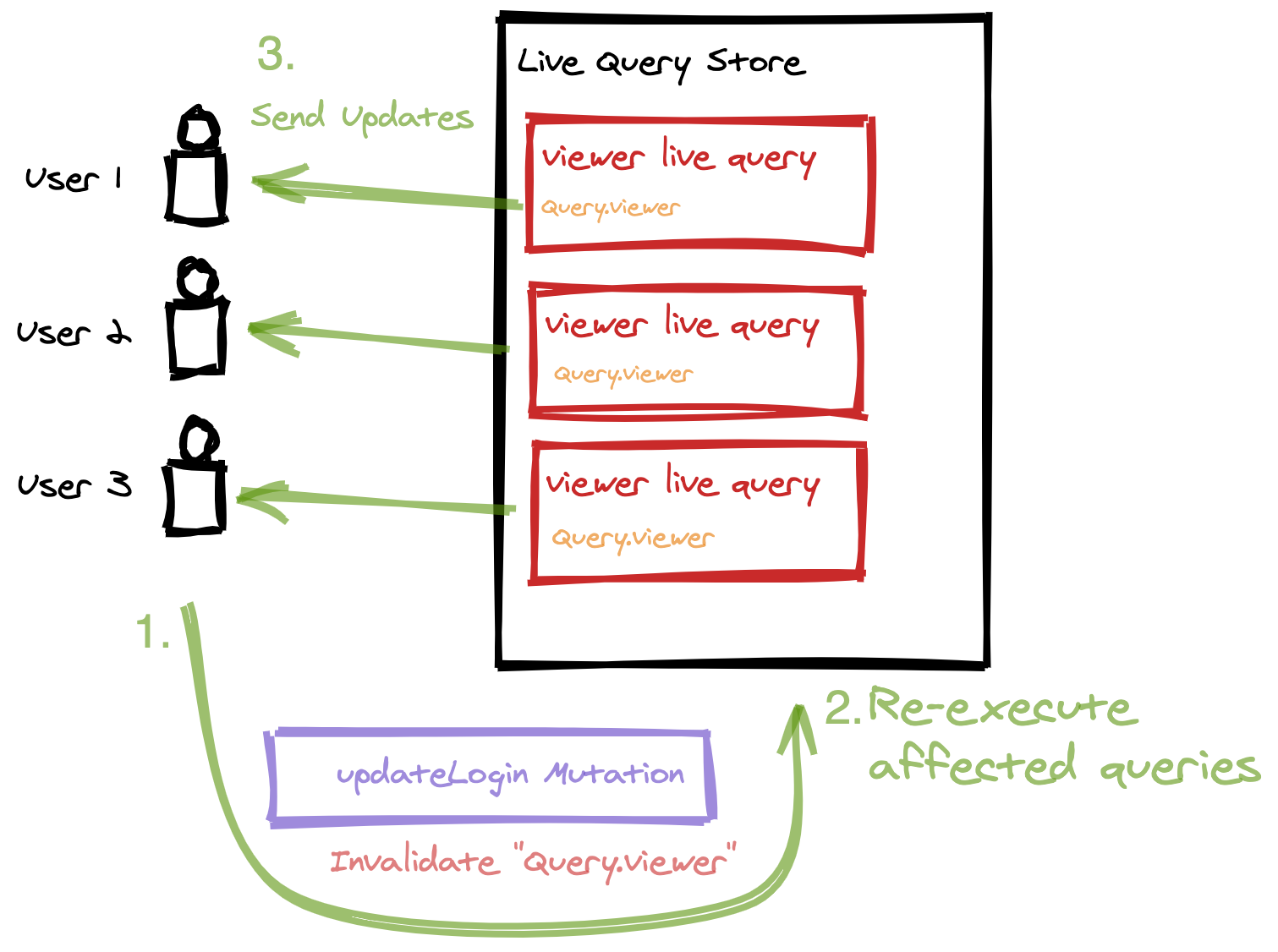 At the same time, the user could also be referenced in another operation e.g. a list of all available users (Query.onlineUsers). The Query.viewer event would not cover and schedule a re-execution for operations that select the user via that field.

As you probably noticed the user has an id field of the ID! (nonnull id) type. This is a commonly used field for uniquely identifying a resource on the client-side. Apollo-client uses the __typename field in combination with the id field as the default resource cache key (User:1), Relay goes a step further and already assumes that the resource type is already encoded (e.g. base64("User:1") Note: You are not forced to use base64 🤔) inside the id and therefore only uses the id field.

What if we could also use such an identifier on the server-side in our live query store implementation?

My current implementation just traversed the AST of the query operation and extracted the schema coordinates on the root query type. E.g. Query.viewer for the viewer live query operation from above.

However, in case we would want to identify the user via the id we must also add something like User:1 to the set of resources the live query operation selects. This requires schema knowledge as the live query store needs to know which type has an id field and if included in the selection set, gather the corresponding resource identifier.

As mentioned above this allows more granular query invalidations. 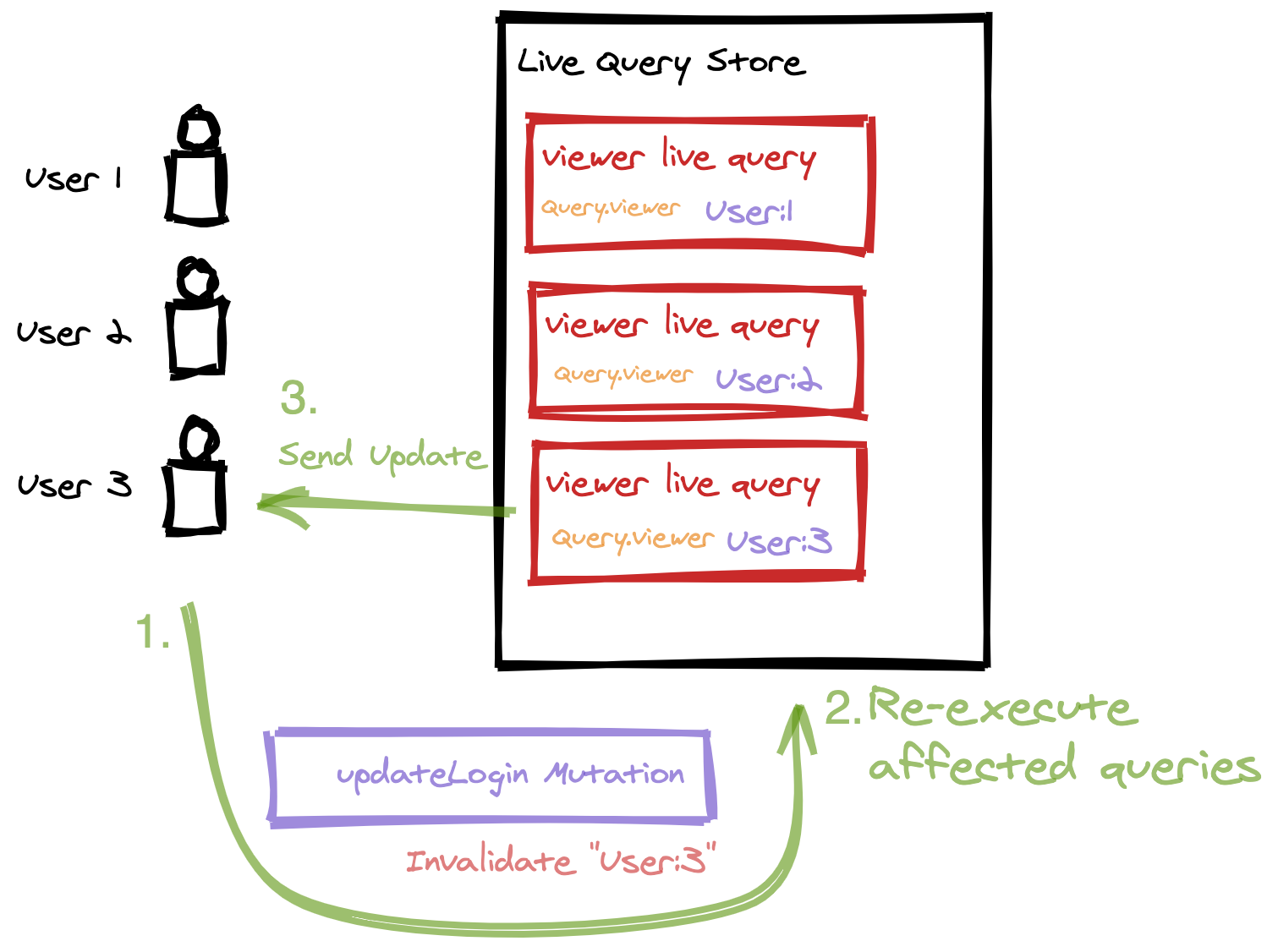 The first drawback I had in mind is that if an operation does not specify the id field on the selection set, the resource cannot be tracked by the live query store.

However, most operations will probably select the id field as it is most likely used on the client for the cache keys.

Furthermore, it could be possible to simply transform the query in such a way that the id field is added to the selection set (similar to how apollo-client is by default adding a __typename selection to each object type).

For keeping things simple I decided to push the responsibility for selecting the id field to the client that sends the live query operation. I also could not find a use-case in my existing application where there was no id selection for a resource 👍.

The next obstacle is to decide how the ids are extracted and I had two options in mind.

This simply seemed complicated to me as I would need to traverse the whole result while somehow guessing/checking the type of each leaf based on the operation AST and the schema. I quickly dropped that idea.

2. Manually register the resource identifier by calling a function that is injected via the context

Imagine if we had to register a resource manually in each resolver that returns an object type.

It might seem quite simple for a single resolver, however, it can quickly clutter and lead to bugs if we have to manually do that for any resource in any resolver.

Ideally a library user will just have to add a context.liveQueryStore.triggerUpdate("User:1") line to the updateLogin mutation field resolver in order to magically schedule an operation re-execution, without the overhead of adding an additional function call to each resolver.

So, I thought more about how this could be implemented in a less verbose way.

As any other field, the id field has a resolver (either the default resolver provided by GraphQL or a user-defined resolver), so if there was a way to wrap each id field resolver with a function that could solve the issue. The wrapper could call the actual resolver, register the resource, and then return the value. The user won't have to care about anything (besides adding the id field to the selection set of the query).

The best library for transforming and modifying GraphQL Schemas is graphql-tools. Fortunately, it is now maintained by The Guild, as apollo abandoned it and was maintained pretty poorly.

So I dug a bit into the fancy documentation and found @graphql-tools/wrap.

A quick excerpt from the documentation:

Schema wrapping is a method of making modified copies of GraphQLSchema objects, without changing the original schema implementation.

Looks perfect, but since in this specific case I could potentially modify/map an existing schema, I digged a bit further, chatted with @yaacovCR and learned about mapSchema from @graphql-tools/utils. It maps an existing schema into a new schema while applying some rules (kind of similar how Array.map() works 🤔).

Using mapSchema might be slightly faster as there will be no delegation to a second schema.

So the final plan is the following: We map the existing schema and warp the resolver fields append the resource identifiers to a Set.

The implementation for executing the operation is similar to the following:

Now after the operation has been executed against the schema the newIdentifier Set should contain the identifiers of all the resources that were resolved during the operation execution.

The live query store can now use that information for re-executing queries once a resource identifier event is emitted 👌.

Identifying resources and invalidating queries based on a resource basis rather than a query root field basis allows more efficient query re-executions and can avoid pushing unnecessary updates to clients.

GraphQL Tools is a super handy library that can be used for solving a huge variety of problems. I am glad it got such a huge update and good documentation!

There is still more to discover and build in live query land!

We still need to manually notify the live query store that a resource must be invalidated. An abstraction for doing this behind the scenes could vastly differ for different stacks.

Maybe the ORM/database store layer could emit the events or a proxy could emit those events based on database operations such as INSERT, DELETE, and UPDATE.

Re-executing a query operation is nice and smart, but not the most efficient solution. What if we could only re-execute certain resolvers? I already have some ideas in mind, and I will probably write about that as well!

Check out this super cool talk about live queries @ Facebook!

Check out this super cool talk about live queries @ Samsara!

I also wrote an article about my Socket.io GraphQL Server Engine implementation!